Here are the results of the

This year kicked off with an all new event!  The Extreme Field Target competition proved to be a favorite event among many.  The course consisted of 5 lanes, 4 targets per lane, and 2 shots per target.  These targets were spread randomly between 23 and 97 yards and the course was demanding with a couple offhand and prone positions.  The targets had kill zones that were vital shaped rather than all circles, and the targets were supersized and sturdy for high power airguns.  The course ran smoothly, and shooters left feeling challenged but excited in the fun of the match.

Later in the day on Thursday was the Extreme Big Bore paper target match.  Shooters gathered around and blasted 5 holes in each of the 6 bulls at 200 yards!  This was by far the loudest competition we ran!

Friday morning started early with Speed Silhouette Trials.  Shooters setup to compete in our famous and imitated event!  4 metal targets were placed at each distance (25, 35, 45 and 55 yards) and shooters all have a shotgun start.  As time raced on the targets were flying and shooters were scrambling to load single shot or load magazines, or whatever was needed to knock down the animal silhouettes!  And by noon, the damage was done and the scores were recorded to tabulate who the finalists for Sunday’s finals would be.  After lunch targets appeared at 75 Yards and the first card for Extreme Benchrest was shot.  4 Relays later everyone got a break for the evening.

Saturday was jam-packed even more with the morning kicking off to the longest event of the weekend, the 25 Meter Benchrest match.  Heat after heat ran through the benches and 75 shots were recorded across 3 target cards per shooter.  The match was scored as fast as it was shot thanks to Phoenix Airgun Club’s revolutionary electronic scoring system, made by Orion.  In the time it took shooters to pack up their gear, grab some water and relax, the scores were being handed out from the previous relay!  Such a cool system.

But we didn’t give the shooters much of break, as the Extreme Benchrest 75 Yard card #2 was shot next.  The two cards were then combined to choose the top 20 shooters from both classes, Sportsman and Pro, for Sunday’s finals event.  Throughout the entire day, 10-Meter Indoor Pistol was running relays for the shooters who wanted to compete.

The evening ended with some entertainment.  We met up at the clubhouse and listened as Steve Scialli from the Airgun Exploration and Advancement Channel, Raymond Hackland from the only Airgun Dart Manufacturer in the world, Matt Dubber of the AirArmsHuntingSA YouTube channel in from South Africa, and Rossi Morreale from the American Airgunner TV spoke, showed pictures, video, and told stories.  Following the keynote speakers, Airguns of Arizona announced a very cool promotion which will take place over the next two years.  More details will be shared online on this promotion very soon.  The evening ended with an announcement of the scores for the finals, and everyone dispersed to get some much needed rest.

Sunday kicked off with the big bang.  We were back on at Big Bore with a new event, the Extreme Big Bore Metal Flash Target.  Competitors started with 26 bullets on the bench.  The first target was set at 85 yards, and competitors had to hit this 12 times before they could move to 200 yards and continue with the remaining bullets.  Targets were scored 5 points per hit at 85 yards, and 10 points per hit at 200 yards.  These points were totaled and added to the paper target scores on Thursday to determine the overall champion.

We then moved quickly to the Speed Silhouette finals, where 10 shooters from each class shot for the absolute best time.  16 targets needed to fall before the timers stopped with record speeds this year.  As you will see in the results below, shooters have been working on improving their times this year.

Once the match was complete we quickly moved out to 100 yards and the finalists were placed on their benches for the Extreme Benchrest finals.  The wind and heat made shooting tough, and the results below show how trying these conditions can be!  Once the shooters all completed their 25 shots, the targets were rushed off for scoring and the shooters packed up to move over to the much needed relief of the banquet and awards ceremony.

As we wrap up another successful year of Extreme Benchrest, we would like to give special recognition to all the clubs, vendors, media and individuals who helped make this the greatest event to date!  We also would like to recognize each and every competitor who traveled from all corners of the globe to come support our event and share in the good times!  We appreciate all of you.

Here are the results: 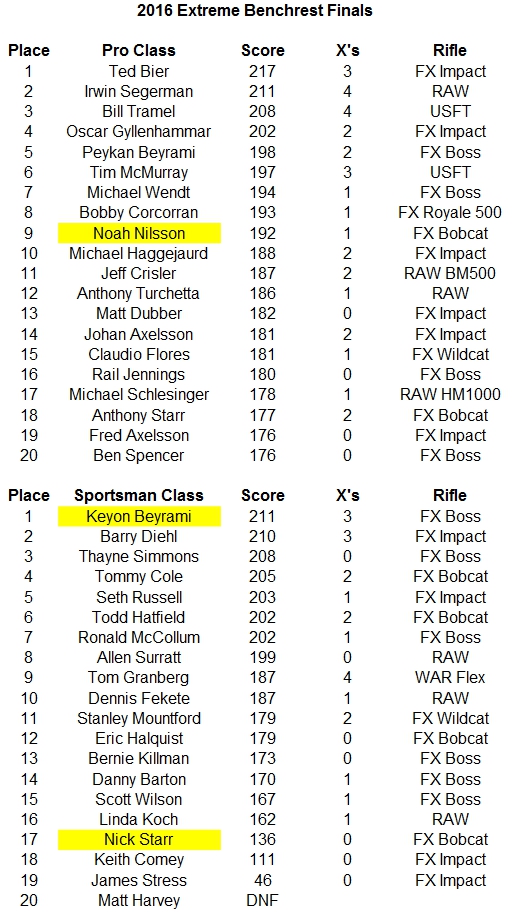 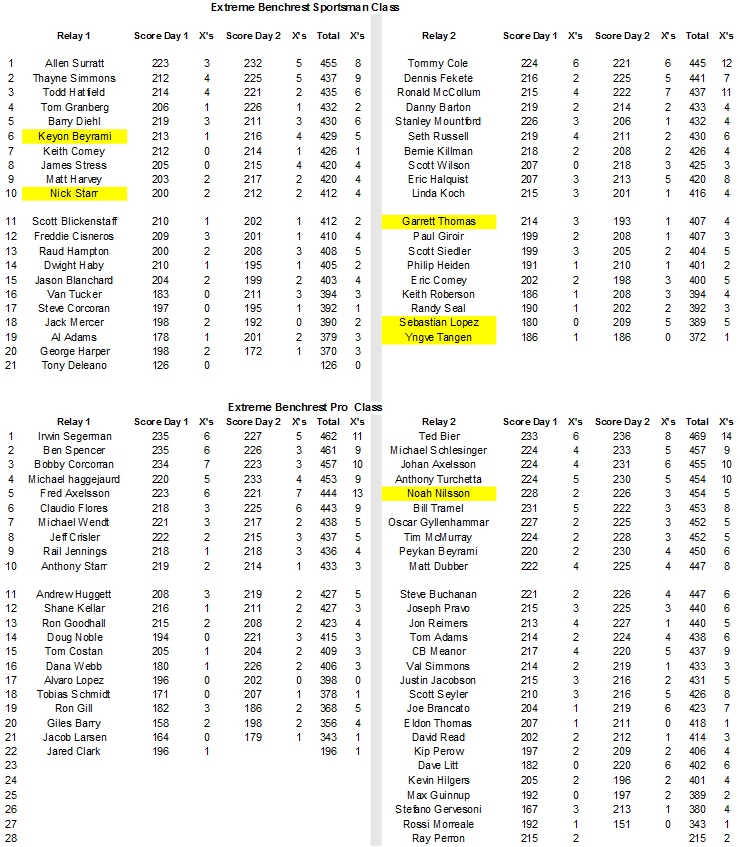 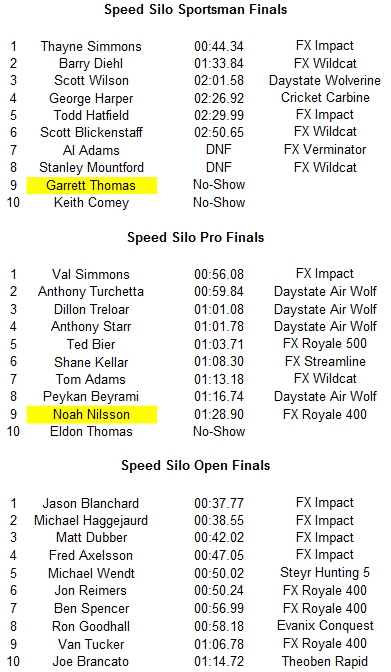 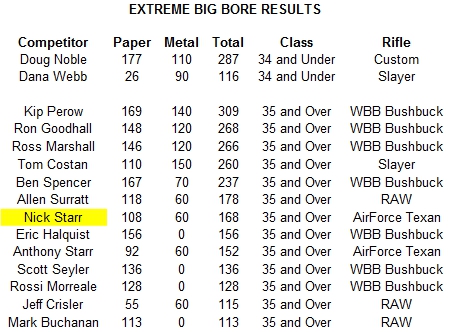 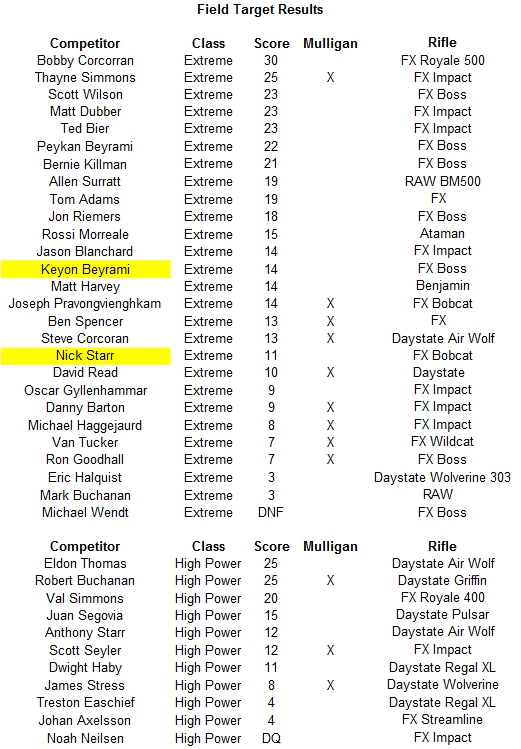 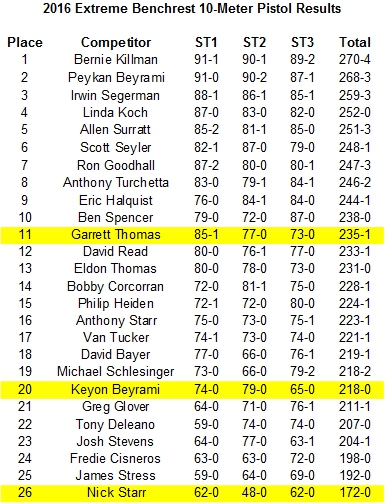 Airguns of Arizona and Extreme Benchrest™